Our phone lines are very busy at the moment.  We are sorry if you are having trouble getting through.  If you are calling about the £150 Government Council Tax Rebate you can find information about how to apply for the rebate here.

Information about the scheme

Why did we do the work

We had lost a substantial amount of the beach between Clacton to Holland on Sea, a facility which is important for local people and for the local economy. This coast protection scheme has provided beaches along the 5 kilometre stretch protecting the cliff and promenade which, together with rock groynes, will combat the effects of coastal erosion. Over 3,000 homes and businesses will be protected over the next 100 years. 23 new beaches in separate bays have been created which can be enjoyed at all states of the tide.

Getting the scheme started

There was a lot of background work to get this major coast protection scheme off the ground.

The project – the biggest ever for the District, costing up to £36 million and covering 5kms from Clacton Pier to Holland Haven – was signed off by the Environment Agency (EA) on the 10 September 2013.

Consultants Mott MacDonald prepared the Project Appraisal report (PAR) which was submitted to the EA in May 2013.

This developed and appraised sustainable coast protection options for the Clacton and Holland-on-Sea frontage required as part of the processes to secure technical approval and government grant funding towards the project.

The scheme will protect more than 3,000 homes and businesses for the next 100 years and is seen as a catalyst for the renaissance of that area.

We got the ball rolling in 2014 by putting up £3million which was matched by Essex County Council (ECC), with a further £1 million being committed by each authority.

Another £512,000 was successfully achieved through the Government’s Growth Fund money and £27.5 million came from Flood Defence Grant in Aid from the Environment Agency.

Securing the Growth Funding enabled the project to move forward at pace and for us to appoint Mott MacDonald to undertake the preliminary and detailed design early and in advance of the approval of the PAR.

The project team arranged topographical, geotechnical and bathymetric surveys along the scheme frontage to inform the design process and numerical and physical modelling is underway to enable the design to be optimised. 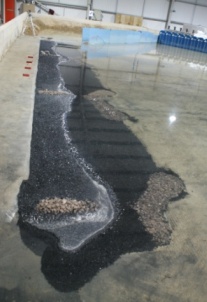 The physical modelling was carried out by HR Wallingford, who are experts at hydraulic research.  The establishment tested the design under exacting conditions, recreating what would happen along the coastline in heavy storm conditions.

A vital Marine licence was also secured.  The Marine Management Organisation (MMO) gave the all-clear for the work to be undertaken following our application. The MMO, which is based in Newcastle, granted the licence which authorises the marine activity to be carried out under the scheme.

VBA Joint Venture Ltd won the contract for the scheme.

We held an exhibition at Clacton Town Hall in Autumn 2013.

What was involved in the work

The scheme is made up of 23 fishtail rock groynes and approximately 950,000 cubic metres of sand and shingle beach recharge.

349 trips were made to the offshore dredge site and 863,000m³ dredged and pumped to the foreshore

The beach recharge material comprises sand / shingle mix similar to the existing beach material along the frontage. The material was pumped onto shore, via a 800mm diameter pipe line, from a dredging vessel moored offshore during high water periods. The material formed a beach with a crest 18 metres wide and a level of 1 metre below the existing promenade level. Owing to the natural processes that occur on the beach, the shape of the beach will evolve over time.

Because the works were on a beach they were subject to tidal and weather impacts and were undertaken 7 days a week and 24 hours per day.

Phase 1 works between Holland Haven and Fernwood Avenue commenced 22 July 2014 and was completed and the beaches opened to the public on 24 January 2015.

Phase 2 works between Fernwood Avenue and Clacton Pier commenced end of March 2015 and the beaches were completed and fully opened to the public on 25 September 2015. 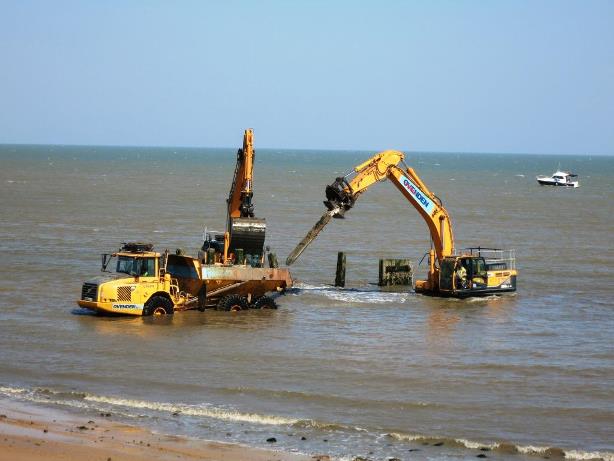 Frequently asked questions about the scheme

How long are the fishtail groynes?

What is the distance between each of the groynes?

How do fishtail groynes work?

The bigger arm is protection against the North Sea waves.  The smaller arm for waves coming up from Kent.

How long will the groynes last?

The rocks should last at least 100 years with maintenance.

How many groynes are there?

There are 22 fishtail groynes and one terminal groyne, positioned near the radar mast.

The Local Development Order (LDO) for Clacton and Holland on Sea Seafront was approved by Planning Committee on the 11th November 2014.

Many parts of the seafront within the LDO area have, in recent years, suffered from a lack of investment due to the need to spend limited funds on essential promenade and coastal defence maintenance. Parts of the cliff and promenade have had to be closed at various stages for safety reasons.

Some of the privately-owned beach huts appear to have lacked investment to raise the standard of the hut because of a high risk of storm damage and probably because of the lack of local amenities such as good or accessible beaches. The lack of available funds has also meant that other seafront infrastructure in this area has been allowed to deteriorate and there is substantial space along this part of our coast to add new beach huts.

With the major investment of £36m in new coast defences which will provide new beaches along a 5km frontage from Clacton Pier to Holland Haven, there is an opportunity to improve existing infrastructure and develop 1st class 21st century facilities along this stretch of seafront, creating a new vibrant leisure offer of a superior standard for both residents & visitors alike.

What does the LDO permit?

The Clacton Pier to Holland Haven LDO allows the erection of new (and alterations to existing) beach huts, kiosks, shelters and toilet blocks and permits the erection of other structures such as play, sports and leisure equipment and other similar associated facilities without the need for planning permission subject to a number of restrictions on the size, height, design and location of the new development within the LDO area:

Click here to view the adopted LDO and statement of reasons.

Area covered by the LDO

The LDO covers the area comprising the cliff slope, lower promenade and 20m of beach, measured from the seaward face of the promenade, along the 5kms of frontage from the north east boundaries of Clacton Pier and Clacton Pavilion towards Holland-on-Sea, ending at the Gunfleet Boating Club. No development will be permitted in the area of SSSI which falls within the area of the LDO.

Click here to view the plan of the LDO boundary.

Information about the ships