A parade of veterans and local community groups saluted civic dignitaries at Clacton Town Hall before marching to the war memorial in the Seafront Gardens.

Reverend David Lower took a Service of Remembrance at the war memorial, with hymns accompanied by music from the Salvation Army Band – while Ellie Bould from Tendring Brass bugled the Last Post and Reveille.

Wreathes were laid by dignitaries and veterans’ groups representatives.

Jeff Bray, Tendring District Council Chairman, did a reading during the service and thanked everyone who attended. 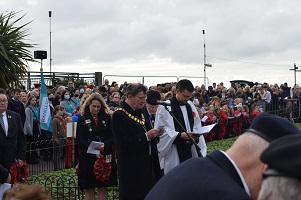 “It was pleasing to see so many people turn out for this year’s service; while there is always a strong turnout, having had no event last year due to Covid-19 I am glad people made up for it this year,” Councillor Bray said.

“By coming together we can collectively remember the sacrifice made by millions who have given their lives in conflict for our freedom over the years.”

Dan Casey, President of the Clacton Royal British Legion, added: “Remembrance Day is important and to see people come out in force to pay their respects it means so much to those who have served and their families. 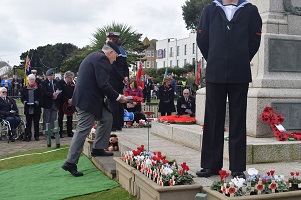 “An important part of the service is our commitment: ‘We will remember them’. It is vital that we never forget those who fight on our behalf, or the bloodshed caused by war, and pass that on to future generations – which is why it is particularly pleasing to see so many younger people attend.”